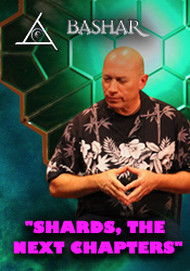 Shards, The Next Chapters - DVD Set

Darryl Anka reads the first 3 chapters of his novel, "Shards of a Shattered Mirror", a story about the life and experiences of Willa Hillicrissing, a sage and parallel reality specialist from 700 years in our future.  Bashar and Willa answer your questions.